History of the CSA 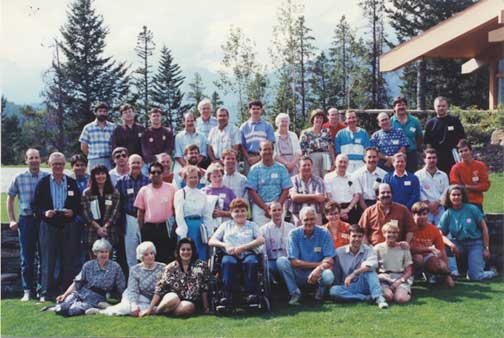 In August of 1991, a ground-breaking conference took place in Banff, Alberta. Initiated by leaders of support groups from Toronto and Edmonton, it brought together people who stutter from across Canada, as well as speech-language pathologists and family members. Out of this conference came the Canadian Association for People who Stutter (CAPS), later to be renamed the Canadian Stuttering Association.

In 1991 self-help groups existed across the country, from Vancouver to Halifax, and the New Brunswick-based organization Speak Easy distributed a newsletter and information about stuttering treatment. Encouraged by the success of the National Stuttering Association in the U.S. and the International Fluency Association, it was time to explore the idea of forming a national organization in Canada. This led to the first Canadian conference for people who stutter.

It was time to explore the idea of forming a national organization in Canada.

The beautiful setting of Banff allowed for outdoor activities, and the event featured a dinner and other social events. Yet there was also work to be done. In daily workshops, attendees were asked for their input on various topics, and divided into groups for brainstorming sessions. Should there be a national organization? If so, how should it be structured? What would be the role of supportive professional speech-language pathologists? Should specific treatment methods be recommended?

People liked the idea of forming a national organization. It would allow groups to share information, give each other tips on running support groups and grow membership, obtain national funding, and organize events. Support groups, while still operating independently, could benefit by a central “hub” to be in contact with one another. Another conference was proposed for 1993, to take place in Ottawa.

Support groups, while still operating independently, could benefit by a central “hub” to be in contact with one another.

The Canadian Association for People who Stutter (CAPS) became a reality, and in the decades that followed planned conferences and provided information, advocacy and support for people who stutter and the general public. But the dream of a coast-to-coast support network with a national headquarters never quite materialized, due in part to the forces of Canadian regionalism. In the Maritimes, Mike Hughes wished to continue running Speak Easy independently as he had been for many years. In Quebec, a separate francophone organization formed.  On the other side of the Rockies, British Columbia also preferred to operate autonomously, forming the British Columbia Association of People who Stutter (BCAPS).

Different social and economic realities exist today. With less people involved in the self-help scene, less money available and a shifting social landscape increasingly centred on social media, CSA has moved away from destination conferences. Since 2014, the organization has held one-day smaller scale events in Toronto that have been very successful.

Looking back, it was an extraordinary experience in those days before the Internet to meet and connect with people who shared the same exceptional life challenges. Moving forward, there are still a multitude of reasons to get people whose lives are affected by stuttering together and be empowered and strengthened by real life encounters.

Note: We will issue a tax receipt for donations of $20.00 CAD and above. Thank you for your support.